For our midweek Advent Sermon series we’ve been talking about people(s) in the Old Testament that foreshadow Jesus.

This past week I preached on Genesis 14 and Psalm 110, which have just about nothing in common, other than some dude named Melchizedek. And his first appearance comes out of nowhere in the book of Genesis. Abram as just rescued his nephew, Lot. He’s battled some of the kings in the land of Canaan, and after the battle, he is met by a group of kings. One of which is this guy, Melchizedek.

He’s got an interesting name…Melchizedek, meaning, “King of Righteousness.” And he’s got two significant titles. He’s both King of Salem (meaning “peace,” but also just the ancient name for Jerusalem) AND he’s High Priest to God Most High (the pre-Exodus 3 way of referring to YHWH).

So you’re forced to ask the following questions…How does this guy fit into the story? How is he even possible? We have no record of Canaanites worshipping the God of Israel before…well…Israel. Why is this encounter even mentioned in Genesis?

Apart from who this guy is, consider what he does. Melchizedek, King-Priest of Salem, meets Abram in the Valley of Shaveh, bringing him bread and wine and bestowing upon him a blessing: “Blessed be Abram by God Most High, Possessor of heaven and earth; and blessed be God Most High, who has delivered your enemies into your hand!” Seriously, who is this dude? Why is he blessing Abram? What special authority from God Most High does he have to dish out blessing in the first place?

And after receiving this blessing from Melchizedek, Abram then proceeds to give Melchizedek a “tenth of everything,” This is the first tithe that occurs in Scripture!

Why on earth would Abram offer this dude a tithe?

I really don’t have any answers to most of the questions Genesis 14 raises. This guy is just kind of a mystery. And adding onto the mystery of this interaction is the fact that Melchizedek’s interaction/blessing with Abram immediately precedes the Covenant that God Most High makes with Abram. After chapter 14, though, Melchizedek is never mentioned again in Genesis.

In fact, the only other time in the Old Testament that Melchizedek gets mentioned is Psalm 110.

I actually believe Melchizedek is intentionally mysterious and vague. You are meant to walk away with some questions, which you should carry with you throughout the story of Israel in the Old Testament. And as you make your way through the story, you pick up more and more questions about things that seem unexplained and unfulfilled. Things that are promised and prophesized, but not yet realized.

When Melchizedek does show up again is Psalm 110, the Psalmist, similarly, gives us almost no information about the historical Melchizedek. Rather, he functions as a literary device (which does NOT mean he wasn’t a real person) that helps shape biblical Christology. That way, when the Messiah does come, He looks familiar.

So, let’s look at Psalm 110: This is one of the most quoted portions of Scripture, by Scripture. The New Testament authors reference it 20+ times. And Jesus references Psalm 110 in a way that makes it clear that He understands Psalm 110 as being about Himself. And reading Psalm 110, you realize that the inspiration/hope for this Psalm comes from the story of 2 Samuel 7 — the Covenant God makes with David. God says to King David, “I will raise up your offspring after you, who shall come from your body, and I will establish his kingdom. He shall build a house for my name, and I will establish the throne of his kingdom forever.“

So, the Psalmist, proclaims the day in which God will fulfill His promise. The Psalm is filled with “kingly” language, anticipating the day in which this Anointed One will sit upon His throne and defeat His enemies.

But, in verse 4, you have the reference to Genesis 14, “You are a priest forever after the order of Melchizedek.” This Promised King is a King-Priest.

Not coincidentally, this is the same Christology we get in Zechariah’s prophecy. Chapter 6, verses 12-13:

Crazy stuff! The Branch (which is a named used to reference the Messiah in Isaiah and Jeremiah… a branch or shoot from the stump of Jesse) is going to be a King-Priest.

Tying into this train of thought, I offer what I consider to be an interesting tidbit (that is debated amongst biblical scholars): Jesus is known as “Jesus of Nazareth.” It has been argued that the town of Nazareth, comes from the Hebrew root “nasar/neser” which as a noun means, “shoot or branch.” Whether or not this is correct, the wordplay is fascinating, but ultimately, not really theologically important.

More importantly, Jesus is “of Bethlehem” — His birthplace and the ancestral home of Jesse’s family (the Davidic lineage). This fulfills the prophecy of Micah 5. This, together with Jesus’ lineage, by legal adoption, through Joseph (Matthew 1) and, arguably, by genetics through Mary (Luke 3 — although this interpretation of the genealogy is not universally agreed upon), testify that this Jesus is the Davidic King. Messiah.

Going back to Psalm 110, looking at verse 4, without the context of Genesis 14, is confusing because verse 4 almost feels like a throwaway line because there’s no expounding on what it means to be “after the order of Melchizedek,” other than it being “forever.” And even with the context of Genesis 14, we still don’t really know much, regarding this priesthood, apart from it preceding Abraham and being a blessing to Abraham. But in the New Testament, the author of Hebrews doubles-down on that same thought in chapter 6, verses 19-20…

We have this [the certainty of God’s promises] as a sure and steadfast anchor of the soul, a hope that enters into the inner place behind the curtain, where Jesus has gone as a forerunner on our behalf, having become a high priest forever after the order of Melchizedek.

Fortunately, for us, he doesn’t stop there. He continues to actually expound upon the significance of this priesthood in chapter 7. Here’s some takeaways:

So, if you read the whole book, the Christology that the author of Hebrews offers us is Jesus as King-Priest. He takes it one step further, though, as we’ve already seen… Jesus is not just the King-Priest offering a sacrifice. He is the Sacrifice, Himself.

There’s no better illustration of this Christology than the scene of the crucifixion: 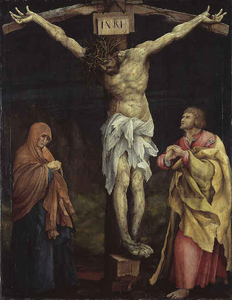 Jesus is King crowned with thorns. The sign above Him reads: JESUS OF NAZARETH, THE KING OF THE JEWS. Jesus is Priest, entering into the Holiest Place, reconciling us to God. Jesus is sacrifice. Hanging from the altar. The Lamb of God who takes away the sins of the world.

Our God is incredible. It is amazing the threads He has woven together in Scripture. I haven’t even scratched the surface of its intricacies.

Praise God for our King-Priest, Jesus.

May God bless your reading, Amen.

PrevPreviousElf on the Roof?
NextCASS Christmas EventNext
Back to News

Our mission is to live out the truth of God’s love, and to serve our community.